One of the key advantages of adopting microchannel coils is their low internal volume, resulting in low refrigerant charge and the ability to use flammable refrigerants like propane or ones of the A2L flammability class.

Besides the degradation of heat transfer, frost deposition on heat transfer surfaces results in several adverse effects such as blockage of airflow passages and increased pressure drop and fan power.

The recent parametric studies on microchannel coil operation under frosting conditions and consequential field tests performed by Kaltra figure out the best trade-off in air-source heat pump design based on microchannel heat exchangers.

Frost growth usually occurs due to the moisture content of the air as well as the generally low operating conditions of evaporators. During the defrost cycle, the heat pump doesn’t provide heating and consumes additional energy. In comparison to finned tube heat exchangers, microchannel coils typically require somewhat more frequent defrost, making the task of defrosting optimization even more topical.

The time between defrosting cycles on a frosting coil can be increased with the use of a lower fin pitch, but this significantly lowers the heat transfer rate. In our experimental heat pump setup, we used a two-slab heat exchanger construction with a dehumidifying coil having a lower fin density located in front of the airflow and the second coil of high fin density. This design leads to a significant portion of the moisture to condense and collect on the front coil.

The amount of heat transfer in the front coil is limited, causing minor airflow temperature drop, limiting the amount of condensed moisture, and delaying the frost formation. A wide fin spacing of the front coil causes condensate formed on the fins to flow downward by gravity easily. Further heat transfer occurs as the airflow passes through the second coil.

The above design allows to significantly increase defrost intervals and reduce defrost time. The second coil – evaporator – will not be subjected to icing in almost all weather conditions except complete extreme.

Given that proper condensate removal is only possible with vertically-oriented microchannel tubes, the heat exchanger arrangement of reversible heat pump must have manifolds installed on top and bottom, with preferable refrigerant inlet on the bottom.

Reversible heat pumps operate in either direction to provide cooling or heating, employing a reversing valve to reverse the refrigerant flow. In heating mode, when the heat exchanger acts as an evaporator, condensate water must be effectively removed from the heat exchanger surface.

The installation angle of the heat exchanger impacts condensate behavior: In most cases, the coil can be installed vertically, while horizontal installation will lead to condensate retention. For high condensate volumes, optimum inclination angles are 15 to 25 degrees to vertical. It must also be noted that louvered fin design is far preferable for better condensate shedding compared to flat fins.

To further mitigate frost accumulation on the coil surface, a hydrophobic coating can be applied to the exterior surface of the heat exchanger. This prevents performance degradation and delays frost accumulation and reduces the frost build-up rate. Frost that does form on the hydrophobic coating is generally weak and loose compared to frost formed on uncoated surfaces. The resultant effect is the shorter time required to defrost.

In sum, the advantages of a novel heat pump design are worthy of attention: 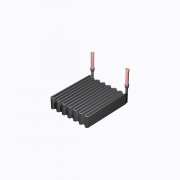 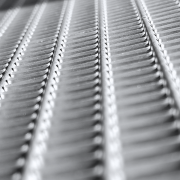 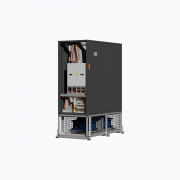 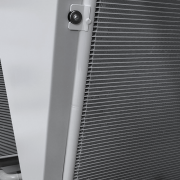 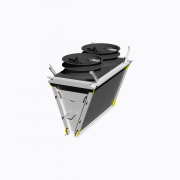 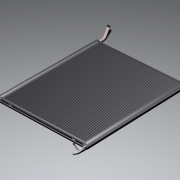 Lower-GWP alternatives to refrigerant R410a for air-cooled chillers
Scroll to top
We respect your privacy
We use cookies on our website to give you the most relevant experience by remembering your preferences and repeat visits. By clicking “Accept”, you consent to the use of cookies that are necessary for the functioning of our website and cookies that optimize the performance. However, you may visit "Settings" to provide a controlled consent.